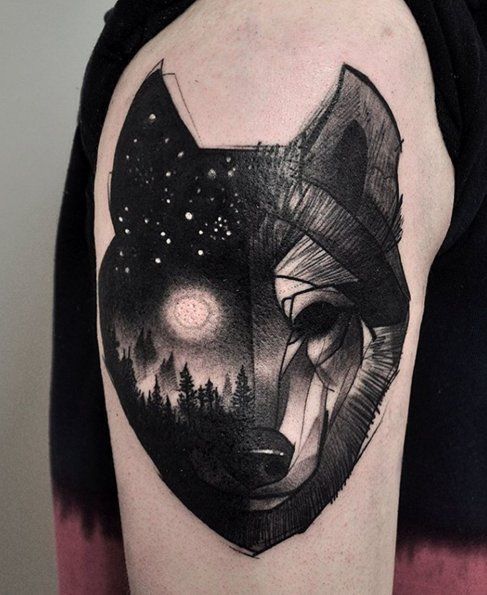 For those looking for something simplistic but also matching up to the tribal origins of the wolf, this mystical wolf tattoo in black is a great choice to imprint on the body. On the one hand, it depicts the nightlife of the forest, while on the other, it shows the real strength of the wolf as an animal.

This tattoo also stands for spiritual protection, a feature that wolves are associated with since their tribal origins of being a spirit animal. The arm, the chest and the upper back are great areas to imprint this tattoo. 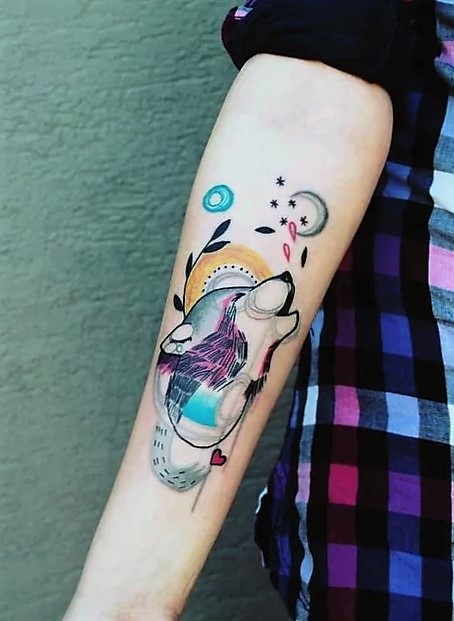 What if you want a wolf tattoo that completely fits your imagination? Forget the symbolic aspects and leave the tribal facet out of this tattoo, and you have a unique watercolour-based tattoo that you could decorate as per your choice.

Just like this – where the wolf seems to be having a happy time at night, and the hues are spread everywhere, without a match. Similarly – you, too, could patch up something that is as random as this watercolour tattoo and ask your imprint artist to carve it out for you.

How about giving the wild in you a free flight? Get your calves inked with this wolf in wilderness tattoo that imprints the wolf against the forests with a touch of wild pattern art. Done in jet black directly on the skin – this brings out the primal qualities of a wolf – the ferocity, the strength and definitely the hunter nature that they are known for.

Suitable precisely for male calves, this is one of the rare wolf tattoos that one wishes to imprint on their body. But there’s no harm in bringing some wilderness out! 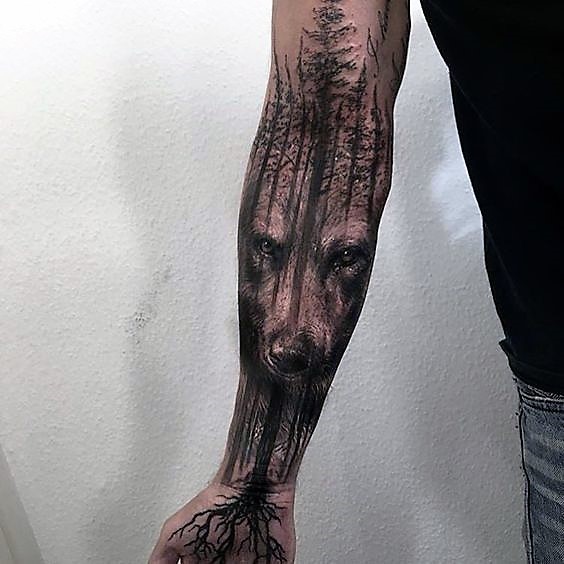 If you are a man inspired by the indigenous body art of the tribals, it is time that you get a taste of the same. This is one of the full-sleeve tattoos that depict the tribal imitation of the wolves, their spirituality, strength, devotion and loyalty. Mostly done in one’s hands – this tattoo looks best in black and that too at a forest backdrop.

You could very well choose this as your next style if you are in for the macho look. Instead of going jet black, you could also choose the black-grey combo to derive the best results.

25. This unforgettable wolf and raven tattoo. 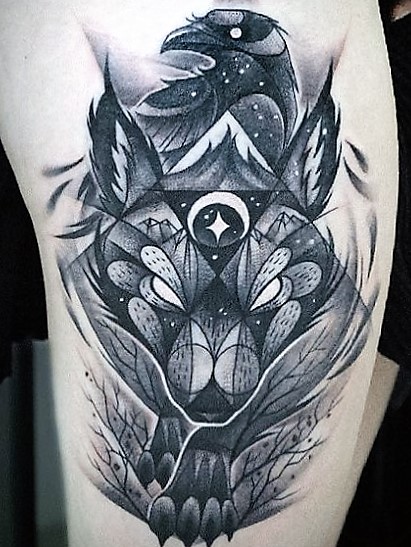 Are you a guy who loves mysticism? Then why not seek help from the mythical tales? That’s precisely why you can opt for this God Odin tattoo with its dual ravens and wolf package. The Munin and Hugin ravens are considered messengers of God, while the wolf, in this case, is reminiscent of destruction and darkness.

Therefore – for the lovers of duality – this raven and wolf tattoo symbolizes both intelligence and darkness, a sense of wisdom yet a destructive scenario. To enhance the effect, keep the base black.

26. This terrifying wolf and skull tattoo.

Contrary to the other wolf tattoos – this wolf and skull combination tattoos signify the end of life or even after life. Skull has always been a part of death and mysteries associated with death – but the wolf in certain mythologies has been depicted as a guide to man after death.

The geometric figures at the head of this tattoo match the circle of life, enhancing the effect. You can either keep it in black or add some darker shade to multiply the gory effect. 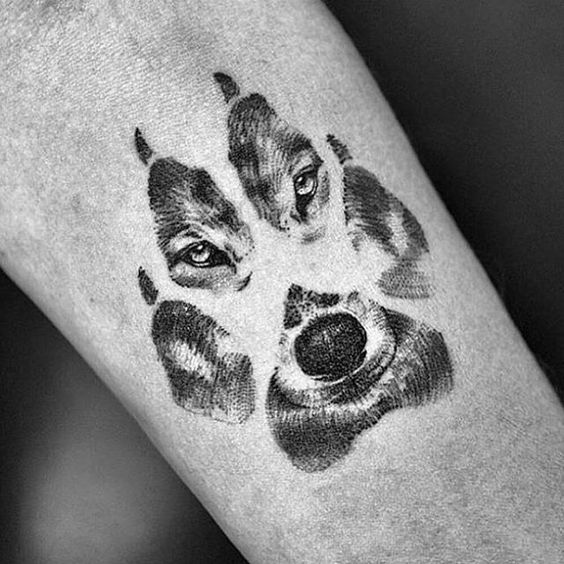 Standing true to the Native American tradition – this wolf paw print tattoo shows the concept of moving forward. Wolf tattoos strongly connect to American and Japanese myths and folk tales. Mostly – it is the ferocity and ruthlessness that this tattoo depicts, but when the paw print is highlighted, it also denotes a chance to move forward and embrace life.

Though black is the pet shade to denote this paw print, if you are experimental – you could also try other softer shades to ink this tattoo. Additionally – you could imprint tiny paws around the tattoo. 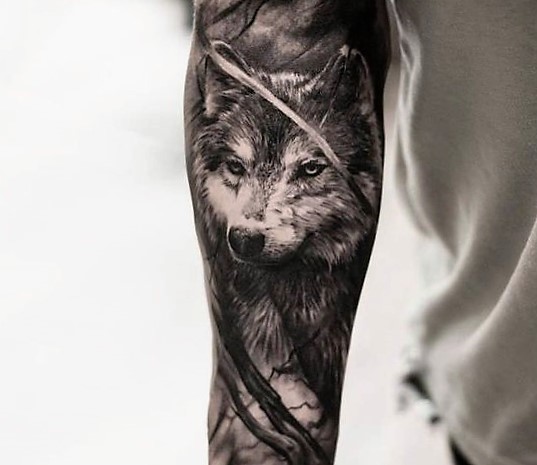 Realistic tattoos are just what you want to decorate your body. Well, why not imprint the wolf to make the best of it? Symbolizing the traditions of courage and virility – this tattoo brings out the physical and mental strength that you symbolize. The black hue that has been used enhances its effect to a higher level.

If you are in search of a menacing tattoo that shows your true bodily courage – this realistic wolf tattoo is a great alternative.

The wolf, as you know, is associated with primal tenacity. Going back to its totemic or spirit-related connotations, this primal wolf tattoo depicts how it helped the man carry through his life and saved their sanity in the toughest of tough times. The strength of wolves is their tenacity, courage, and robustness. These are the features that this primal tattoo portrays.

This tattoo is best done in jet black with the night-forest backdrop. If you want to customize it, add a dark quote about life to enhance the effect.

21. These matching tattoos. Bright watercolor floral tattoo is another amazing piece of work. If you love yellow color or...
more
Share 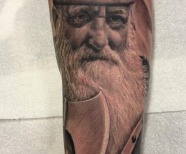 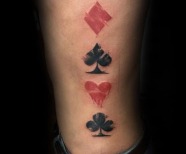 Poker Tattoos: How To Decide What To Get?

Benefits of beetroot for skin: A blessing you must not miss

Why travel from Delhi to Haridwar by Car?