Santa Muerte tattoos are taking the world by storm. “La Santa Muerte” aka the Saint of Death is said to have healing and protection powers, she can help you overcome your enemies and most importantly, she is said to be in charge of the time and manner of your death. If you please her and have her goodwill, she is said to ensure your safe passage to the afterlife where you are to be joined by your ancestors. Don’t forget about retouching tattoos before sharing your Santa Muerte tattoo on Instagram.

Depictions of La Santa vary between images similar to those of the grim reaper and the more common ones of a lady with skeletal features, often with roses and jewels included in the portraits.  If you can’t decide wich one to choose you may buy a paper with the special sketch of a tattoo. The most common image used to depict The Saint of Death is the sugar skull, inspired by the famed illustrator José Guadalupe Posada’s interpretation of “La Calavera Catrina”,  as explained by the custom tattoo art team at Tattoo Stylist. Keep scrolling and have a look at what we think are some of the best Santa Muerte tattoos out there. Thanks for sharing, thanks for caring. 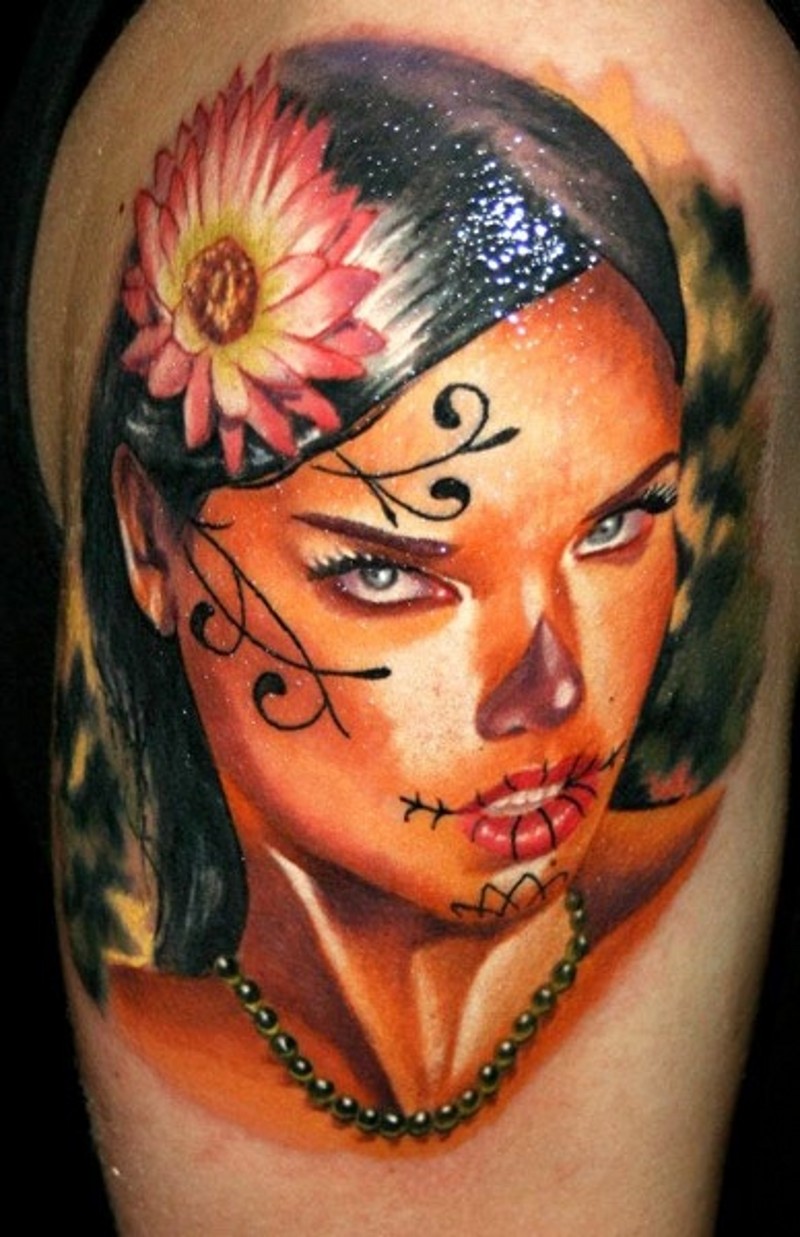 This tattoo is so vibrant and stunning, honestly. Looks super cool as well. Here we can see a badass woman with a flower on. The vibrant colors and the artwork makes the tattoo super attractive. This looks stunning on the back as well. The tattoo is generally termed as the ‘dead girl tattoo’, which represents the day of the dead in Mexica which means your offerings to the dead people. Honestly, the most common is de Los Muertos tattoo. A gothic tattoo design that is all dark with vibrant colors to denote the joy of the festival to cherish the memories of the dead soul.

Aah, the bright blue-indigo color of the tattoo makes it look super Amazing. The hairline strokes and the tribal prints on the face of the lad make it look tribal and touch a bohemian vibe into the tattoo. The tattoo is again a ‘dead girl tattoo,’ which makes it more gothic. The unique feature of this tattoo is that it looks genuinely good as it has vibrant colors, and the shades of blue make it somewhat of a unique piece. You really need to tick this on your bucket list if you love tattoos. 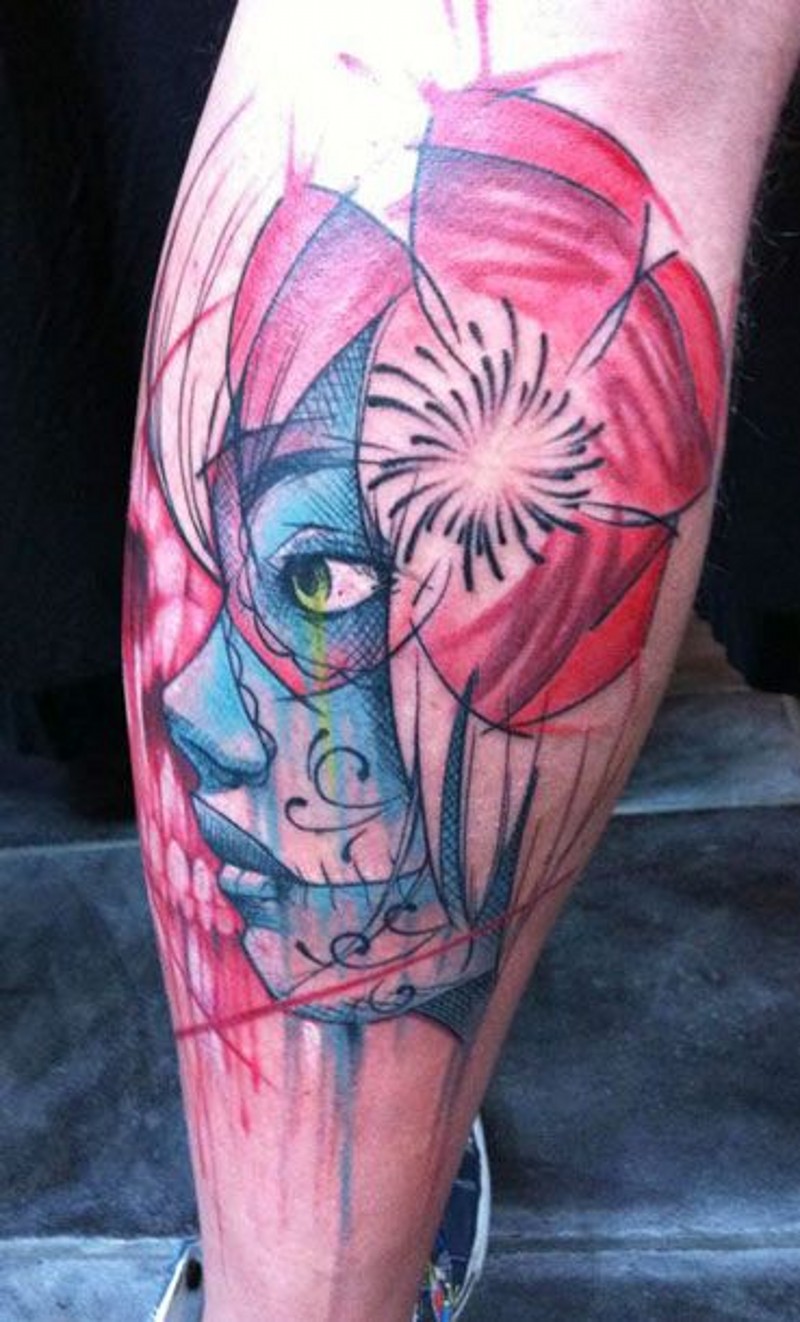 Again a beautiful piece with pink and blue hues. I don’t know where do people get such an artistic realm to make a tattoo look this beautiful. A piece that deserves recognition. This tattoo looks super, and you can try this on your hand and of course, on your back. You can even try the smaller version on your thighs if you are a girl. Looks pretty as well. This is again a piece from the ‘dead tattoo’ lot. A face structure on a flower denotes a person’s mind. Pretty isn’t it? 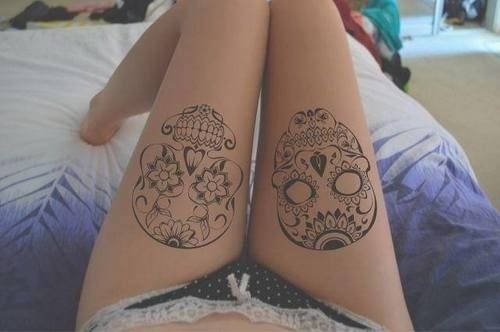 The sugar skull tattoos look spicy instead of sugary. Jokes apart, these sugar skull tattoos are my absolute favorite cause it’s minimal, it has nice patterns, and looks pretty as well. Skull tattoos are in trend right now, and you can definitely get a skull tattoo if you want. As you can see, it also has a bohemian touch to it. You can get the tattoo done on your leg, hand, back, etc. These Santa Muerto tattoo designs are associated with showing the afterlife and the devotion of Saint life.

5. These quirky his and hers tattoos.

Skull tattoo, but make it couple friendly. This tattoo idea is quite unique and interesting. As you can see, the design is associated with a skull, a female skull, and a male skull. There’s a message as well which says- ’til death. This tattoo can be customized accordingly, and the message can be customizable as well. I personally like the idea of this tattoo, and I think it’s quite unique in its own way. You can get this tattoo anywhere where it’s visible properly. Also, the flower patterns and the colors make it look more pretty as well. 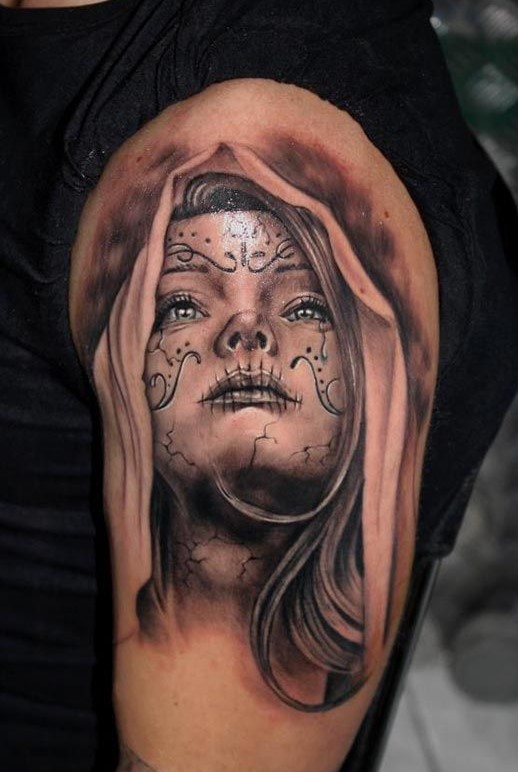 Santa Muerte is commonly known as ‘the lady of bones .’Santissima Muerte is her real name, and is commonly known as the lady of death. She is worshipped in Mexican culture as the protector against death and disease. But some people believe that she is seen as an entity that embodies death herself. Honestly, religion is growing, and more people are getting attracted to it. Here you can see a woman having face inscriptions looking above. This tattoo santa muerte is referred to as the image of innocence. If you are a follower of Santa Muerte, then you can consider getting this tattoo. 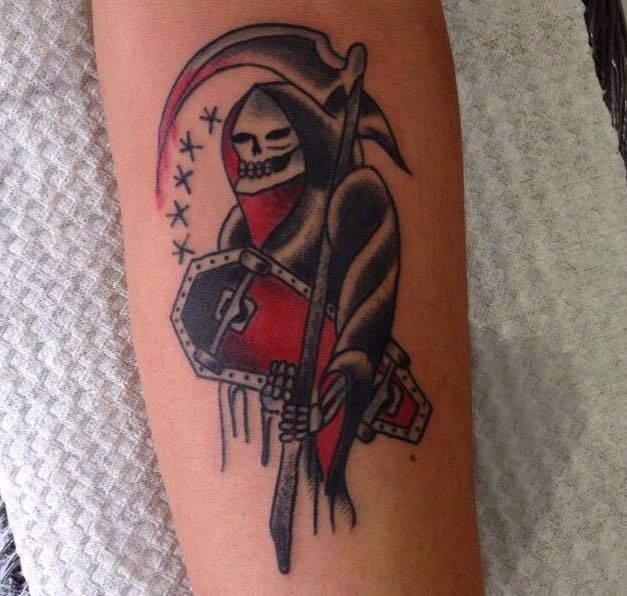 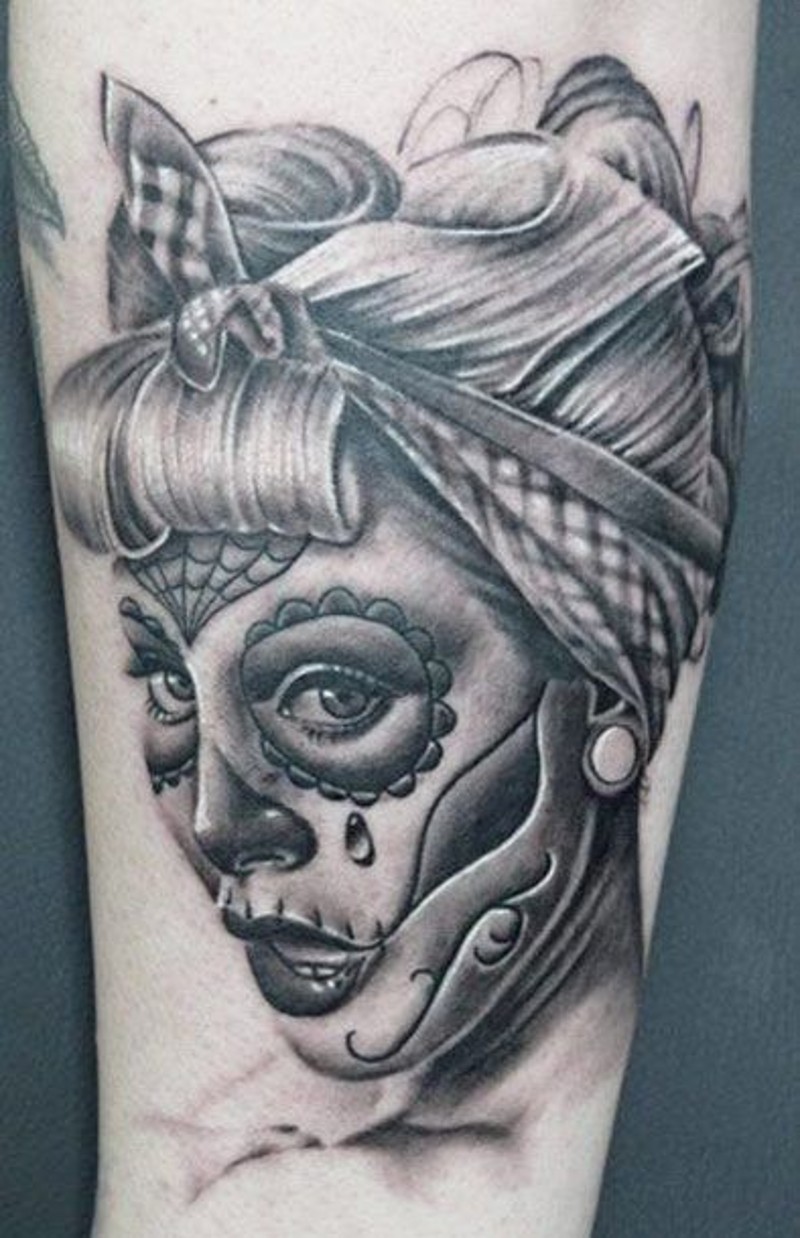 Watercolor artistic tattoos make your body look like a canvas. It looks extremely great, and it’s great for someone who loves tattoo santa muerte. This is a pin-up sugar skull picture that has been made with shading and no colors. You can also go for the color variant, which looks similarly great. The meaning still stands the same which is a Santa Muerte tattoo. You can go for a smaller version of this tattoo if you have a smaller body shape. 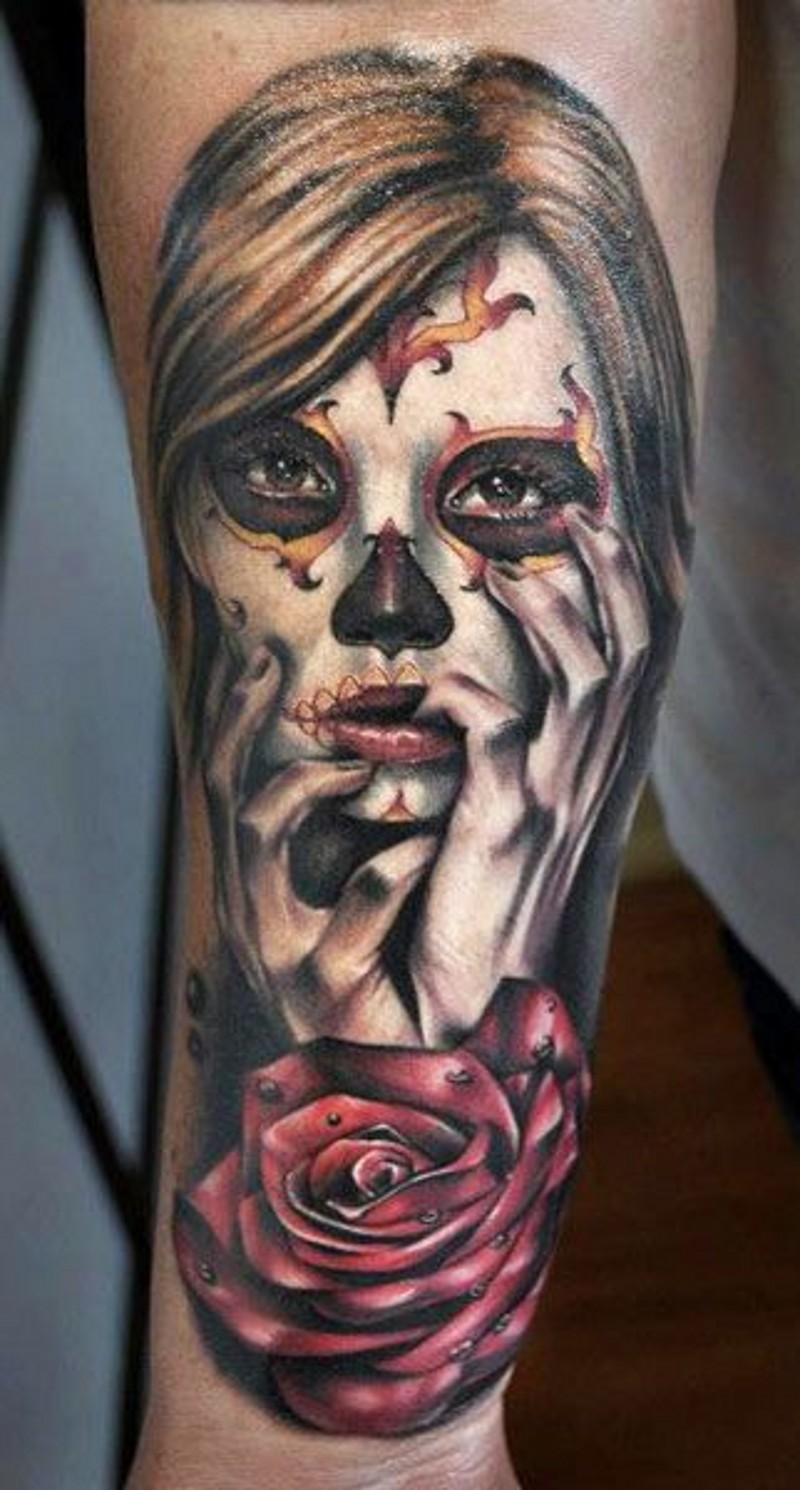 A female figure with an intense look and fire signs all over her face. This is a sugar skull tattoo and a tattoo santa muerte design as well. These tattoos can be considered as a personal dedication to someone deceased. It is a way to remember and celebrate the ancestors. The lady in the tattoo is made brave in order to accept to truth and rose is a representation of embracing the good in it. This beautiful concept can always motivate you as it will stay with you as a tattoo. 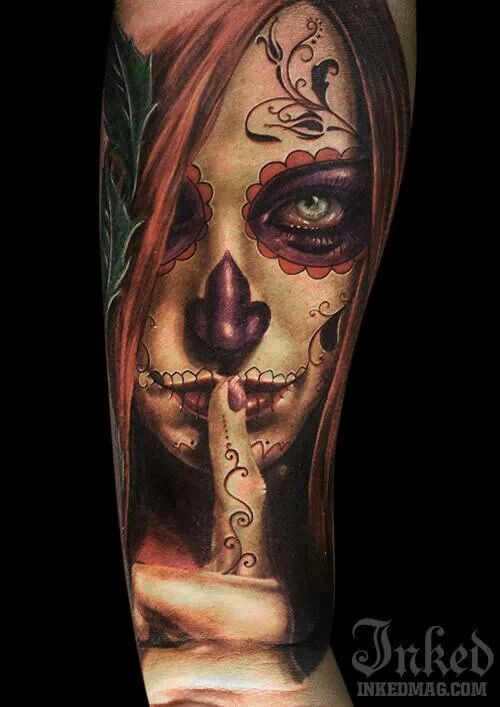 Santa Muerte’s tattoos are dark and mysterious as death, and the afterlife is considered a dark concept, and there’s a reason behind it. As people find it difficult to accept this simple truth and tend to forget where they come from. This will always help you to stay grounded and remember the roots from where you come from. Again a colorful tattoo with tribal designs and beautiful patterns. The meaning is beautiful, and the tattoo santa muerte also represents that beautiful afterlife truth. This tattoo is so pretty that you can stare at it for hours.

Tattoos for women are just like women themselves: they come in all shapes, sizes and colors. They can be feminine,...
more
Share

Yin Yang tattoos are all about balance. If you think about it, everything we know has a counterpart, an opposite...
more
Share

Emrah Ozhan tattoos aren’t just a tattoo. They are a combination of sheer art and intellectual imagination, making them real...
more
Share 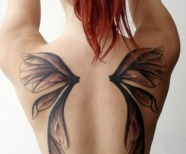 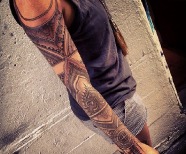 List of The top 8 animals that can bite you

The Road to Self-Confidence, and How to Travel It

Factors to Consider Before Getting a Tattoo